You are using an outdated browser. Please upgrade your browser to improve your experience.
by Joe White
March 18, 2011
Apple's fifth generation iPhone will purportedly feature a metal back, and a larger screen. The news comes from a Foxconn source, who has apparently seen the iPhone 5 at one of the company's plants. According to the source, the iPhone 5 will look "fairly similar" to the iPhone 4, despite two changes: A flat, metal back, and a bigger screen. Previously, Digitimes had reported that Apple's fifth generation iPhone would feature a four inch screen. This statement was supported by a purported iPhone 5 design image, which showed an iPhone handset with an edge to edge screen (made possible by a thinner bezel). A four inch iPhone would mean Apple could compete with Google Android handsets in the four to seven inch smart phone market. The iPhone 4 currently boasts a 3.5 inch display. Apple fans would most likely appreciate an iPhone handset with a four inch screen. However, I'm more excited about the iPhone 5's purported metal back - after dropping and smashing my iPhone 4 a couple of weeks ago, I'm really hoping the iPhone 5 is a more durable handset. Apple's fifth generation iPhone will very likely be announced on stage at WWDC '11, which should take place in June. Until then, let us know what kind of iPhone 5 you're hoping for in the comments below. [via 9to5Mac] 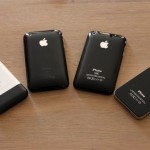 Foxconn Source: iPhone 5 Will Have A Metal Back, And A Larger Screen

Foxconn Source: iPhone 5 Will Have A Metal Back, And A Larger Screen
Nothing found :(
Try something else