You are using an outdated browser. Please upgrade your browser to improve your experience.
by Joe White
March 10, 2011
After digging around in the recently released iOS 4.3, developers have discovered that Apple's upcoming iPhone 5 may feature an A5 processor. We already know that the second generation iPad - the iPad 2 - will feature a duel core A5 processor. Thanks to this powerful chip, the iPad 2 will be much faster than the first generation iPad. Unsurprisingly, iOS 4.3 suggests that there are three different versions of the iPad 2:

However, as 9to5Mac notes, "the iPhone 5 (N94AP), has the same S5L8940 processor." Obviously, this suggests that Apple's fifth generation iPhone will feature an A5 processor (as opposed to the A4 processor - S5L8930 - which is currently used in the iPhone 4). This would make the iPhone 5 even faster than the iPhone 4, which is already very fast indeed. We'll keep you posted. 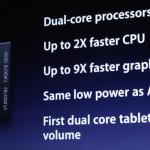 iOS 4.3 Suggests iPhone 5 Will Have A5 Processor

iOS 4.3 Suggests iPhone 5 Will Have A5 Processor
Nothing found :(
Try something else