You are using an outdated browser. Please upgrade your browser to improve your experience.
by Bryan M. Wolfe
April 18, 2011
Has Apple changed the way it calculates the top apps in the App Store? Could they be including more weight to review ratings and active usage data? This might be the case according to a report by Inside Mobile Apps. It has largely been assumed Apple used only download numbers to determine an app’s place in the store’s rankings. However, according to the report, Apple is putting new “weights on top of download numbers to determine top apps.” This opinion is based on conversations with companies such as Flurry, which offer developers pay-per-install and mobile advertising. According to Peter Farago, vice president of marketing at Flurry:

“From our point of view, Apple is absolutely considering more than just downloads, which we believe is the right direction (to) go to measure true popularity of an app.”

If indeed Apple has recalculated how it determines the top apps in the App Store, they haven’t yet made it official. But, something is happening with the rankings. For example, after spending months ranked anywhere between No. 10 and No. 20 on the Top Free list, the Facebook app is now No. 1. Naturally, the Facebook app isn’t new to the App Store. Therefore, it could be Apple is beginning to include active usage data and App Store rankings. Any change to how rankings are calculated affects both developers and App Store customers. For example, according to Inside Mobile Apps, developers might need to “create higher-quality, more engaging apps – which is a good thing. But it may also make user acquisition more unpredictable and it could inadvertently raise the cost of install campaigns even further.” Finally, customers might be unhappy Apple is using usage data on privacy grounds. However, the current iTunes User Agreement makes this possible, with Apple stating under a section called “Disclosure to Third Parties”:

At times Apple may make certain personal information available to strategic partners that work with Apple to provide products and services, or that help Apple market to customers. For example, when you purchase and activate your iPhone, you authorize Apple and its carrier to exchange the information you provide during the activation process to carry out service. If you are approved for service, your account will be governed by Apple and its carrier’s respective privacy policies. Personal information will only be shared by Apple to provide or improve our products, services and advertising; it will not be shared with third parties for their marketing purposes.

Hopefully, if Apple has changed its ratings system, they will let us know very soon. What do you think? Leave your comments below. 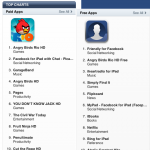 Unconfirmed: App Store Rankings Get A Much Needed Rehaul

Unconfirmed: App Store Rankings Get A Much Needed Rehaul
Nothing found :(
Try something else