You are using an outdated browser. Please upgrade your browser to improve your experience.
by Joe White
April 27, 2011
Apple may have hinted at an upcoming turn-by-turn and traffic feature - which is rumored to be built into a future version of the iOS - in a press release that hit the Web earlier today. In the press release, Apple gave a generalized explanation of the "consolidated.db" file, which appeared to track iOS device owners' location, and has been present within the operating system since iOS 4. While the the file's behavior was partly described as having its roots in a "software bug" (which will be addressed in an upcoming software update), Apple did admit that the company is collecting "anonymous traffic data," too, which will be used "to build a crowd-sourced traffic database." As noted in section eight of the press release:

Back in 2009, an Apple job posting stated that Apple wanted to "take Maps to the next level." Following the publication of this press release, many websites have suggested that this section of the document refers to an upcoming, Apple developed turn-by-turn navigation service. Google provides a similar service on its Android smart phones - it wouldn't surprise me if Apple does the same soon. What do you think? Let us know your thoughts in the comments. [via MacRumors] 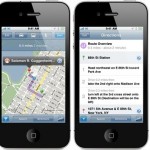 Apple Hints At Upcoming Turn-By-Turn Feature In Today's Press Release?
Nothing found :(
Try something else