You are using an outdated browser. Please upgrade your browser to improve your experience.
by Joe White
April 26, 2011
A recently uncovered patent application suggests that Apple has indeed been intentionally tracking its customers' location, and that the data acquired is to be used by both Apple and various other companies. The patent application - "Location histories for location aware devices" (12/553,554) - was originally filed by Ronald Huang, a senior engineering manager for Apple. As outlined by Gawker:

The patent application, for example, envisions a searchable map plotting the owner's location history; tying location to financial transactions; transmitting location data over the internet to remote servers; and many other uses.

Obviously, this is important: Previously, reports had hit the Web suggesting that this potentially dangerous feature was a software bug, and Steve Jobs himself stated (in an email) that Apple doesn't track anyone, and that "the info circulating around is false." It would appear now that this is incorrect. The aforementioned patent not only outlines plans for an app called "Location History" (which would display users' previous location on a map), but the data is also "associated" with various events, such as:

Gawker notes that Apple is "exploiting the iPhone's ability to record our every move," and this latest patent appears to evidence this view. I'm hoping a suitable, acceptable explanation is given soon - Apple has yet to officially comment on its latest scandal. However, I wouldn't be surprised if the company just sits tight and waits for us to forget about the "locationgate" - hopefully before WWDC 2011, which is scheduled to take place in June. If you have an opinion, feel free to post it in the comments. 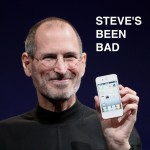 Apple Patent Suggests Steve Really Is A Stalker At Heart

Apple Patent Suggests Steve Really Is A Stalker At Heart
Nothing found :(
Try something else