You are using an outdated browser. Please upgrade your browser to improve your experience.
by Joe White
April 28, 2011
Army of Darkness: Defense is an upcoming iOS game, which is based on the 1992 cult classic movie, "Army of Darkness." The game will be available for the iPhone and iPod touch ($0.99), and also for the iPad ($2.99). According to its press release, Army of Darkness: Defense will feature over 150 lines of dialogue from the movie, "50 initial levels," and one endless level that gamers can unlock. More features of the app, as outlined in its press release, include: If you're a fan of the film - or just an avid iOS gamer - this is undoubtedly an app to watch out for. As mentioned, it'll be available to download on May 12 for all of Apple's iOS devices ($0.99 and $2.99). We've included some screenshots below for you to check out, and you can also watch a gameplay video over at Vimeo. Take a look at the screenshots, and let us know if you're excited in the comments. [gallery columns="2"] 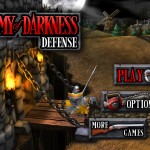 Army Of Darkness: Defense - An Upcoming iOS Game, Based On The Classic Movie

Army Of Darkness: Defense - An Upcoming iOS Game, Based On The Classic Movie
Nothing found :(
Try something else