You are using an outdated browser. Please upgrade your browser to improve your experience.
by Joe White
April 18, 2011
In the coming months, the iPhone 4 will become Flickr's most popular camera - overtaking the Nikon D90, which currently holds the top spot. As you can see in the above graph, the number of iPhone 4 owning Flickr fans has rapidly increased recently - the smart phone is currently Flickr's second most popular camera. Previously, the iPhone held the number one spot (in 2009). However, back then, Flickr did not distinguish between iPhone handsets, meaning the original iPhone, the iPhone 3G, and the iPhone 3GS, were only just enough to knock the top dog, a Canon model, off its podium. Now, Flickr has split up the iPhone handsets - the iPhone 4 alone is very nearly the service's number one camera, which is an incredible achievement. Obviously, this is made possible by the iPhone's camera, which boasts five megapixels, and the large quantity of photo editing iOS apps that are currently available. With the iPhone, photographers can shoot, edit, and upload images, all from their handset. For this reason alone, it is not surprising to learn that popular "point and shoot" cameras are being used less and less by Flickr fans:

It makes sense to replace a digital camera with an iPhone - I always have my iPhone with me, and for this reason alone the photos I take are generally shot using my iPhone 4. If you have an opinion on this data, let us know in the comments. [via TechCrunch] 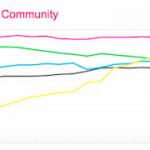 Soon, The iPhone 4 Will Be Flickr's Most Popular Camera

Soon, The iPhone 4 Will Be Flickr's Most Popular Camera
Nothing found :(
Try something else