You are using an outdated browser. Please upgrade your browser to improve your experience.
by Joe White
April 26, 2011
Safari Download Manager is a new jailbreak tweak that makes downloading files from Safari (on your iOS device) incredibly easy. The tweak is compatible with all of Apple's iOS devices (iOS 4+), and is available to purchase via the Cydia Store for $5.00. Developed by Dustin Howett, Safari Download Manager adds an icon to the bottom of Safari. Touching this icon brings up a download management interface (as the tweak's name suggests). However, that's not the coolest thing about this tweak. As you can see in the screenshots below, Safari Download Manager allows users to download pretty much anything they encounter on the Web. By default, files are saved to /var/mobile/Media/Downloads - however, this directory can be changed. Once you've downloaded a file to your iPhone, you can then access that file using a desktop app like iPhone Explorer or DiskAid. Safari Download Manager looks like an incredibly handy tweak, and at $5.00 it's not all that expensive, either. Check it out in the Cydia Store - and if you're a fan of the tweak, let us know in the comments. [gallery columns="2"] [via Cult of Mac] 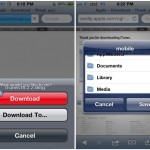