You are using an outdated browser. Please upgrade your browser to improve your experience.
by Joe White
April 21, 2011
A recently released jailbreak tweak - untrackered - allows users to stop iOS from recording their every move. Currently, the tweak is available to download for free in Cydia. Yesterday, we heard that iOS devices geo tag their owner's every mode, via a file called "consolidate.db" (which has been included within the iOS since iOS 4). The data is unencrypted and unprotected, meaning it could be accessed relatively easily. Now, one jailbreak tweak promises to disable this feature. It's called untrackered - here's its description in Cydia:

This package installs a daemon (process that can run in the background) to clean consolidated.db file) No new icons are added to your homescreen. There are no options to configure.

The tweak, which has been developed by Ryan Petrich, is currently available to download for free in Cydia, via the BigBoss Repository. If you're worried about your iOS device tracking you, be sure to check this tweak out. [via 9to5Mac] 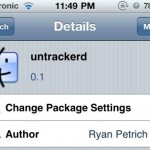 Jailbreak Only: Untrackered - Stop iOS Recording Your Every Move

Jailbreak Only: Untrackered - Stop iOS Recording Your Every Move
Nothing found :(
Try something else