You are using an outdated browser. Please upgrade your browser to improve your experience.
by Joe White
April 23, 2011
According to a recent report by StatCounter, Apple's iPad is already more popular than Linux computers in North America. As you can see in the above graph, the study examined "the top operating systems" in the U.S. While Microsoft snagged the top three spots with its Windows entourage (7, XP, and Vista - in that order), Apple was able to steal position four and five with Mac OS X and the iOS. Importantly, StatCounter examined the iOS on iPads only - because the iPad, as a tablet, is classed as a computer. In sixth place came Linux, with just 0.71 percent compared to the iOS' 1.18 percent. Mac OS X had 14.91 percent, and Windows Vista, XP, and 7 had 19.03, 31.22, and 32.03 percent respectively. Personally, I find it quite interesting that the iPad is already more popular than Linux in North America. However, as outlined by Royal Pingdom, the iOS is ahead of Linux in other countries, too: What does this all mean? Well, it means the iPad is popular - but we already knew that. Perhaps the iPad's popularity (when compared with Linux computers) has its roots in the device's accessibility. Anyone can pick up an iPad, but - honestly - I know nothing about Linux computers, and I think I'm speaking for the majority when I say that. Linux fans, feel free to shout at me in the comments. And if anybody else has an opinion on the above data, be sure to share your thoughts, too. [gallery columns="2"] 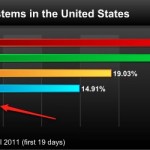 In North America, The iPad Is Already More Popular Than Linux Computers

In North America, The iPad Is Already More Popular Than Linux Computers
Nothing found :(
Try something else