You are using an outdated browser. Please upgrade your browser to improve your experience.
by Casey Tschida
April 6, 2011
It appears that The Omni Group is hard at work to make their OmniFocus products more inline with each other. In fact, one of the features that debuted with OmniFocus for iPad has been confirmed to be making its way to the iPhone and desktop versions of the app. Very early this morning, Omni Group Founder and CEO, Ken Case tweeted a screenshot of an upcoming update to their OmniFocus for iPhone and iPod touch app. The screenshot shows an example of the "Forecast" feature in use on an iPhone 4. In response to user's questions of the previous tweet, Mr. Case made a mention that the company is also planning to bring this functionality to their Mac OS X desktop client .

@Eingang Forecast will be coming to OmniFocus for Mac as well. (I want to use it there myself!) 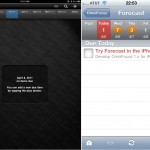 OmniFocus For iPhone To Gain The Currently iPad-Exclusive Forecast Feature

OmniFocus For iPhone To Gain The Currently iPad-Exclusive Forecast Feature
Nothing found :(
Try something else