You are using an outdated browser. Please upgrade your browser to improve your experience.
by Bryan M. Wolfe
April 25, 2011
On your next visit to the local Apple Retail Store, Best Buy, or Walmart, you might want to see if the store is selling the white iPhone 4. The infamous devices might be arriving very soon, according to Apple Insider. In June 2010, Steve Jobs unveiled the iPhone 4. At the time, the Apple CEO indicated his company’s latest handset would arrive in two colors, black and white. Although the black iDevice arrived, as expected, the white iPhone was delayed numerous times. Late last year, Apple promised customers the iDevice would arrive sometime this spring. However, by the beginning of April, we (and others) pretty much wrote the white iPhone off. AppleInsider first reported on Sunday that Apple has begun shipping white iPhone 4 units to its retail stores in the U.S. It is believed that the device will go on sale this Wednesday, April 27. Now that it is arriving, the white iPhone tells us a thing or two about Apple. For one, Apple’s promise has gone fulfilled. Sure it took 11 months, but the white iPhone will retail just as the company pledged. It should be noted, not every tech company that promises a new device delivers (remember the HP Slate?). Second, the white iPhone’s arrival almost guarantees two things concerning the upcoming iPhone 5. Apple spent a lot of time, money, and energy to get the white iPhone 4 out to the public. It would be surprising to see an iPhone 5 launch anytime before fall, instead in June, as is typical for a new iPhone. Second, the iPhone 5 will almost certainly look like the existing iPhone 4 model, at least on the outside. After all, why would Apple release a handset in April that would become obsolete in June? They wouldn’t. Plus, in releasing a new iPhone 4 model right now, Apple will probably not change the iPhone 5 that much (at least on the outside), for the same reasons mentioned above. It will be interesting to see how well the white iPhone sells. I would be surprised seeing existing iPhone 4 owners purchase one, but it might appeal to others. In particular, there are quite a few iPhone 3GS owners out there that might be ready to upgrade. What do you think? Leave your comments below. 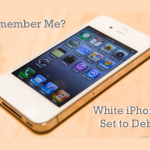 The White iPhone: Why Now? [Updated]

The White iPhone: Why Now? [Updated]
Nothing found :(
Try something else