You are using an outdated browser. Please upgrade your browser to improve your experience.
by Joe White
April 16, 2011
Apple's upcoming white iPhone 4 has appeared in Verizon's inventory system, suggesting that the handset will be released in the coming weeks. Previously, we heard that the white version of Apple's iPhone 4 - which was supposed to hit Apple Stores last summer - would arrive this spring. The news came via Apple Store signage, and Phil Schiller's Twitter account. However, it would now appear that this is definitely the case. A snapshot (above) of Verizon's inventory lists the white handset. This would suggest that the white iPhone 4 is coming very soon. Furthermore, iPhoneItalia claims to know the exact date for the launch of the white iPhone 4 (via a source) - April 26. As of this moment, nothing has been confirmed - so we don't know for sure exactly when the white iPhone 4 will launch. But, it looks like it's going to be soon, and very possibly by the end of April. We'll keep you posted. In the meantime, let us know if you'll be buying yourself a white iPhone 4 handset in the comments. [via 9to5Mac and RazorianFly] 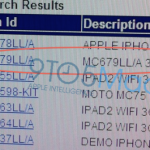 White iPhone 4 Appears In Verizon's Inventory - Coming April 26?
Nothing found :(
Try something else