You are using an outdated browser. Please upgrade your browser to improve your experience.
by A.T. Faust III
April 24, 2011
Yesterday, the tech community was inundated with the seeming substantiation of rumors that Europe is set to receive the white iPhone 4 next week on Wednesday, April 27. We covered that report here and are excited to update the American launch forecast: next week on Wednesday, April 27. That's right, we're getting the great white model on the very same day! Certainly, this jibes with Apple's tradition of debuting all devices on its home turf. Had this been an altogether new product, the US would've likely received it well ahead of any other country. But we at AppAdvice are all for international harmony, so the more the merrier! Best Buy inventories are showing expected allotments of about 10 units each, with no word on capacity splits. European interest has shown that the 32 GB handset is probably more sought-after than its 16 GB counterpart, but we won't know for sure until initial sales numbers come through. So far, only GSM AT&T models are confirmed, but we expect Verizon's CDMA units to be immediately available. Because demand will be extremely high (especially for a model-year-ending swan-song release), we advise all those interested to line up early, wait patiently, and be equally ready to take home either version. No word just yet on whether AT&T or Verizon retail stores will have stock at launch. 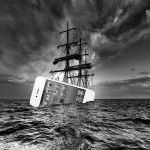 White iPhone 4 Makes Landfall On American Shores
Nothing found :(
Try something else