You are using an outdated browser. Please upgrade your browser to improve your experience.
by Joe White
May 24, 2011
According to a variety of reports, Apple has recently approved the App Store's 500,000th iOS application, meaning that the company has approved half a million apps in just 34 months. While the figures haven't yet been confirmed by Apple, Chomp, 148Apps.biz and Chillingo have posted a sizeable infographic (below) t0 the 500,000 Apps Facebook page, outlining the statistics behind the milestone. Here's the infographic: Interestingly, these results do not collaborate with those of AppShopper, who claims that 498,841 apps have been approved, instead of 500,000. Regardless, we can expect an update on App Store figures from Steve Jobs, this June 6 at WWDC. And if you're looking to compare these figures, rest assured that the Android Market boasts just under 300,000 approved apps (and three billion app downloads, as opposed to Apple's 10 billion plus). Glad you've got an iPhone? Me too. Let us know your thoughts on the infographic in the comments below. [via 9to5Mac] 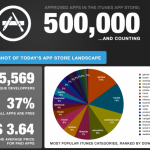