You are using an outdated browser. Please upgrade your browser to improve your experience.
by Bryan M. Wolfe
May 2, 2011
Consumer Reports has examined the new white iPhone 4, and has determined it is exactly the same size as the original black iPhone 4 model. Accordingly, both models are 0.37 inches in thickness. This news follows numerous reports indicating the white iPhone was noticeably thicker than its black counterpart. As part of its thickness test, Consumer Reports used high-quality calipers at its Yonkers, New York lab. In doing so, it tested both the white and black iPhone models. Apple's Senior Vice President of Product Marketing Phil Schiller responded to this issue recently via Twitter.  He stated at the time that the white iPhone 4 "is not thicker, don't believe all the junk that you read." It looks like Consumer Reports has confirmed Schiller's assessment. Meanwhile, Consumer Reports remains committed to not recommending the iPhone 4 to its customers, whether it be a black or white model. They state:

Bottom line: Consumer Reports still recommends that you get a case with your iPhone 4 to mitigate an reception issue our labs confirmed for both the AT&T and Verizon versions of the iPhone 4. But at least you don't have to worry about it not fitting. 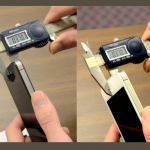