You are using an outdated browser. Please upgrade your browser to improve your experience.
by Bryan M. Wolfe
May 1, 2011
Recent reports indicate developers are testing iOS 5. However, what isn’t happening is iOS 5 testing on a purported iPhone 5.  9 To 5 Mac originally reported this bit of news and other interesting details. According to 9 To 5 Mac, developers are testing the next generation iOS on iPods, iPads, and iPhones. We know this because of log files. However, there is no indication a future iDevice is part of this testing. In other words, the iPhone 5's release is looking more and more like a fall and not summer release. They state:

Unfortunately, we haven’t seen any unreleased devices likely because Apple is aware that usage logs go out to developers and wants to keep those devices under wraps. This is interesting because widespread testing of apps usually precedes the developer release of a major iOS release by a few months.

In addition, it is reported the iPhone 3GS is also being tested, which signals that the handheld first released in 2009 will work with the iOS. At some point within an iDevice's lifecycle, a future iOS will not work with it. For example, the iPhone 3G does not work with iOS 4.3. Naturally, this is good news for iPhone 3GS owners. Finally, 9 To 5 Mac believes iOS 5 will head in beta form to developers in June, “perhaps” alongside a finished version of Mac OS 10.7, Lion. All these rumors suggest neither the iOS 5 or the next-generation iPhone will be released to the general public at WWDC in June. What do you think? Leave your comments below. 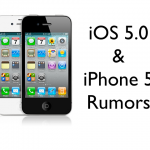 Developers Are Testing iOS 5, But No iPhone 5 Is In Sight

Developers Are Testing iOS 5, But No iPhone 5 Is In Sight
Nothing found :(
Try something else