You are using an outdated browser. Please upgrade your browser to improve your experience.
by Joe White
May 27, 2011
OoVoo Mobile is a recently released app for the iPhone and iPod touch, which allows users to take part in six-way video calls entirely for free. While Apple's FaceTime video calling service is great, users can't engage in a video call with more than one other person at a time, which is a limitation. Fortunately, ooVoo is a handy solution, allowing users to engage in a group video chat with up to five other people. As outlined in the app's release notes, key features of ooVoo include: Currently, ooVoo supports the iPhone 4 and fourth generation iPod touch only, but not the iPad 2. However, we would expect the app's developer to add support for the second generation iPad in a future update, so stay tuned. In the meantime, check out the free app on your iPhone and iPod touch, and let us know your thoughts on ooVoo Mobile in the comments. 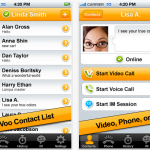 Enjoy Six Way Video Calls With Oovoo Mobile, A Free App For The iPhone & iPod Touch
Nothing found :(
Try something else