You are using an outdated browser. Please upgrade your browser to improve your experience.
by A.T. Faust III
May 19, 2011
Somehow, there has been some speculation in recent weeks about a possible iPad 3D model launching as next year's version of the popular slate. RCRWireless, who first reported the rumor, had this to say:

“The fact that the iPad 3 is 3D is a dead cert,” one Hollywood insider close to the big movie studios told RCR, adding that the screen would be the real magic. She went on to say that the big film studios were currently running around like blue arsed flies trying to gear up to release plenty of 3D content in time for Apple’s next launch.

I don't buy it for a minute. Sure, the marketing would line up beautifully, but, logically, nothing else -- and I mean absolutely nothing else -- makes any kind of sense from a technical, financial, or user-experience perspective. Technically -- or technologically, rather -- the current options available for incorporating a 3D panel into any device are pretty limited. While I think it's a stretch to imagine Apple would use glasses-required active or passive technology for any 3D panel, it's even less likely when you consider the advertised and promoted family-friendly group use the iPad's all about. That means that any approach to 3D would be of the autostereoscopic variety, and that means that production-ready 9.7-inch panels need to be ready to roll very soon. Based on Nintendo's statements surrounding the launch of the 3DS, that seems a bit less than likely. The panel used in the 3DS is 3.53 inches, and, while it represents the current production-ready state-of-the-art (and is a very cool screen, in my opinion as a handheld gamer), there are still several problems with it, including extremely limited viewing angles and distances, ever-present ghosting, and tremendous battery drain. The biggest issue with the screen, though, is that it very visibly halves the active resolution of the 3DS. Apple will not sacrifice multi-user functionality, the clarity of its flagship product, or the iPad's legendary battery life to add what would necessarily become a part-time, switch-selectable feature. (Remember, too, that Apple's trying to get rid of switches, not add more.) It is absolutely unreasonable to expect these problems to be addressed, fixed, and scaled up to Apple's rigorous standards in so short a time. Financially, we have to consider the added costs to both the seller and the buyer in the unlikely event that the aforementioned points are satisfactorily resolved. On Apple's end, this would include a shared investment in refitting production lines at Toshiba and LG LCD plants for smaller glasses-required displays or larger glasses-free units. That increased expenditure would find its way back to the consumer and raise the iPad's industry-leading, competition-crippling $500 starting price. Perhaps iCloud will cut some costs, but, since Apple doesn't take hardware losses, the new service probably couldn't shear off enough overhead to clear the way for such a pricey display. There are no indications that either technology has come far enough to use in a premium tablet device with any measure of practicality. User experience has always been the hallmark of Apple's celebrated culture. To make a 3D-enabled iPad, with or without the need for glasses, Apple would have to significantly devalue that history. As already stated, the group experience, in 3D mode, would be lessened at least and eliminated at worst. Furthermore, manipulating a touch screen while viewing 3D content would be counterintuitive and distracting (fingerprints being an even bigger problem on 3D displays), and -- in the case of autostereoscopic panels -- using tilt control across any plane would be out of the question. Another point to consider is the very real fact that many viewers feel side effects (from minor eyestrain to severe headaches) when viewing 3D content. In fact, when my editor heard this rumor, the first thing he said about it was "Headachegate." As such, the only viable use for 3D on an iPad would be for watching movies. I've been an iPad owner since day one, and I use it for videos approximately five to 10 percent of the time. Certainly, many people use it for movies more than I do, but nearly nobody uses it primarily for that singular pastime. It just isn't Apple to pull out all the stops for such a limited piece of kit. That said, I do think iDevices (and Apple TVs) of the immediate future are likely to support 3D video output for play on compatible televisions. Beyond that, there seems practically zero chance of 3D-capable screens popping up in Apple devices within the next few generations; and, when they do, you can expect the smaller screens -- the iPhones and the iPod touches -- to get that treatment first. Expectedly, Android phones and tablets are already touting all kinds of 3D tech, but don't expect Apple to flinch and change its plans in response. In many ways, this is a coordinated move on the part of Android device manufacturers to stem the tide of interest and business from going so rushingly towards Cupertino's coffers. If Apple does somehow release a 3D screen that is in line with their heralded technical commitment only nine months from now, it would be completely out of left field and easily the consumer technology breakthrough of the decade. In a word, it would be a bigger achievement than the iPad itself. In another word, it's just not happening. 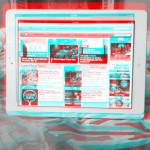 iPad 3 Won't Have 3D, Unless You Believe Bad Hollywood Fiction

iPad 3 Won't Have 3D, Unless You Believe Bad Hollywood Fiction
Nothing found :(
Try something else