You are using an outdated browser. Please upgrade your browser to improve your experience.
by Joe White
May 29, 2011
Peter Hajas is the mastermind jailbreak developer responsible for creating MobileNotifier, the best alternative notification system for iOS currently available. However, a couple of days ago Hajas posted a curious article to his blog, stating that he was going to be "taking a break from MobileNotifier and Widge for a while." Because of the mysterious nature and content of Hajas' blog post, some are speculating that the developer has in fact been hired by Apple, to work on an improved notification system for iOS. Let's look at the evidence. First up, Hajas has been forced to be super secretive regarding his new project. (We all know Apple likes its secrecy.) Furthermore, he states that fans will be able to figure out what he's up to, if they "look around hard enough." As outlined in Hajas' blog post:

I can’t say why, but it’s worth it. Trust me. If you look around hard enough, you’ll probably figure it out.

To me, this would insinuate that Hajas' new line of work is either going to be very obvious, in the media spotlight or both. Following this is the most substantial clue linking Hajas to Apple. He signs off with:

Until then, stay hungry and stay foolish.

Stay hungry and stay foolish? Where have we heard that before? Oh yes, I remember - Apple CEO Steve Jobs used those very words during his famous Stanford Commencement speech in 2005. For those of you who haven't seen the video, we've included it below. (Head over to 13:50 to hear Steve speak the words.) Obviously, this doesn't mean Hajas is definitely working in Cupertino - it's only a theory. After all, because Hajas develops for iOS he very likely has a keen interest in Apple and, just like the rest of us, views Jobs in the light of a demi-god. Because of this, Hajas might have just thought it cool to quote his favorite figure in the tech industry. It's also worth noting that Hajas is currently a student - perhaps he's instead referring to a summer job or even an internship, rather than a position at Apple, Inc. However, some believe that this quote signifies Hajas' new position at Apple, possibly working on an improved notification system for the iOS. It sure would be funny if Apple handpicked a jailbreak developer to revamp its notification system. And it would make sense - after all, the interest in MobileNotifier has been massive (it has over 230,000 downloads so far). Let us know your thoughts on this theory in the comments. Like we said, it's definitely interesting - even if the rumor is based on pure speculation alone. [Thanks for the tip Erik!] 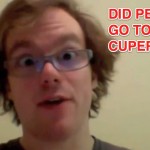 Where Did Peter Hajas Go?

Where Did Peter Hajas Go?
Nothing found :(
Try something else