You are using an outdated browser. Please upgrade your browser to improve your experience.
by Bryan M. Wolfe
May 19, 2011
It’s official: Playboy has arrived on the iPad. The venerable magazine, first published in 1953, is now available on the tablet for the first time. First announced by Playboy founder Hugh Hefner in January, Playboy for iPad has bypassed Apple’s app approval process and therefore isn’t available as a native app. Rather, it is a web app located at http://i.playboy.com via Mobile Safari. For $8 per month, Playboy for iPad subscribers receive full access to every edition of the magazine going back to its first issue in December 1953, which featured Marylyn Monroe on the cover. Included is everything the magazine is known for including its nudity, fiction, Playmate of the Month, and signature Playboy Interview. The June 2011 issue features Mick’s daughter on the cover, Lizzy Jagger. Despite being a web app, Playboy for iPad loads quickly, both in portrait and landscape mode. However, it is recommended you visit the pages over a Wi-Fi connection, although accessing them through 3G is possible too (but, naturally slower). Pages are zoomed in or out by either double clicking with a finger or pinching. Each issue includes a Table of Contents, with hyperlinks attached to each article. Or you may use the horizontal slidebar to navigate, which features thumbnails of each page. Finally, moving from page to page is as simple as swiping a finger back or forth. On the downside, Playboy for iPad is what it is: a virtual copy of its print edition. Meaning, there are no extras such as videos or social networking tools. Still, Playboy has shown that developing an iPad-specific magazine via a web app is possible. In doing so, Playboy doesn’t have to share in the profits with Apple. Playboy for iPad is available for $8 per month. A yearly ($60) and 2-year membership ($100) are also available. Once a membership is purchased, it may also be used from any web browser via a PC or Mac too. 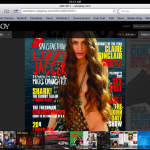 Playboy For iPad Arrives
Nothing found :(
Try something else