You are using an outdated browser. Please upgrade your browser to improve your experience.
by Joe White
June 18, 2011
In the first beta version of iOS 5, Apple has added an amazing feature called "AirPlay Mirroring." This allows users to wirelessly mirror their iPad's display on an HDTV, providing its equipped with an AirPlay capable device (like an Apple TV). This is great, because it allows users to simply share the iPad's display with others, via an HDTV. Browsing the Web, emailing friends and even catching up with RSS feeds can become a big screen experience, and users can even mirror apps on an HDTV, too. Some apps - like Real Racing 2 HD - are taking the idea one step further, by enabling dual-screen gaming over AirPlay. Instead of simply mirroring the display, the gyro-equipped iPad becomes the controller. Recently, Engadget took AirPlay Mirroring in iOS 5 for a test drive with the latest version of Real Racing 2 HD, and the results are impressive. Unfortunately, we can't embed the video right here - but you can view it by heading over to Engadget's website. We've embedded another below which gives a good overview. 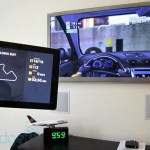 AirPlay Mirroring Gets Taken For A Test Drive - Angry Birds & Real Racing HD Demoed
Nothing found :(
Try something else