You are using an outdated browser. Please upgrade your browser to improve your experience.
by Joe White
June 21, 2011
In the first beta version of iOS 5, Apple has much improved Safari for iOS. After iOS 4 (running on the iPhone 4) scored low marks when competing against Android and Windows Phone handsets back in April, Apple has given Safari for iOS a speed boost, and the Web browser now performs remarkably well. The original video (posted by WinRumors), in which Safari performed badly, is embedded below. In that video, the iPhone registered a mere two frames per second when running an HTML5 test. The Android smart phone scored 11, and Microsoft's Windows Phone handset clocked up a score of 26. Now, things have changed. The first beta version of iOS 5 (which, do remember, is experimental) has been put to the test and scores impressively. Moments ago, Safari on my iOS 5 running iPhone registered 28 frames per second, and others - such as 9to5Mac - have registered even higher scores. Apple has also improved Home screen Web apps in iOS 5, giving them a nitro boost. You can find out more about that over here. Below, we've embedded the original video, which hit the Web back in April. Rest assured, however, that things have been greatly improved in iOS 5. 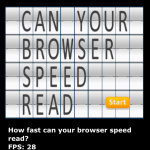 Apple Improves Mobile Safari In iOS 5 - Now Zooms Ahead Of The Competition
Nothing found :(
Try something else