You are using an outdated browser. Please upgrade your browser to improve your experience.
by Joe White
June 23, 2011
According to a recent study conducted by BTIG Research (registration required), Apple's iPhone is the most popular handset with both AT&T and Verizon. In total, 58 percent of the stores investigated by the study (AT&T and Verizon) named the iPhone as their most popular product. A further 20 percent stated that the iPhone shares the position with another handset. Of the AT&T stores investigated, 65 percent labeled the iPhone as the most popular handset. A further 31 percent named an Android smart phone as the most popular. Regarding Verizon stores, a lesser 51 percent named the iPhone as the most popular handset, with 38 stating that the iPhone is joint-first, tied with an Android smart phone. Obviously, this is impressive: Both the iPhone and Android smart phones are relatively "new kids on the block," with Apple's smart phone debuting in 2007, and Android smart phones hitting stores the year after. As All Things Digital notes, older smart phones - namely, RIM's BlackBerry handsets - were barely mentioned in the study. These figures are great, but in my opinion, they're only going to get better with time - especially the Verizon figures. Currently, we're seeing a shift in the smart phone market, with Apple gaining a greater chunk thanks to the release of the CDMA iPhone 4. However, not everybody who wants to own a Verizon iPhone has necessarily bought one - I would expect a lot of Verizon fans to be holding out for the iPhone 5, having originally expected Apple to announce the handset at WWDC. This means that, when the iPhone 5 hits Apple Stores (and beyond), there's going to be a big, albeit expected boom in sales - especially at Verizon's end. Could this mean the iPhone will gain even more smart phone market share? It likely does, though of course, we can't be entirely sure. We'll keep you posted. 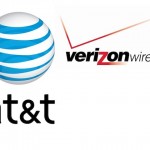 Apple's iPhone: The Top-Selling Handset At Both AT&T & Verizon Stores

Apple's iPhone: The Top-Selling Handset At Both AT&T & Verizon Stores
Nothing found :(
Try something else