You are using an outdated browser. Please upgrade your browser to improve your experience.
by Joe White
June 20, 2011
A recent investigation by Bernstein Research has made an interesting discovery: According to the investigation, consumers choose tablets based on how similar they are to Apple's iPad - a device that dominates (and will likely continue to dominate) the tablet market. The news reached us via All Things Digital earlier today. As discovered by Bernstein Research, in both the USA and the UK 50 percent of the survey's respondents stated that Apple is the tablet brand they'd most likely choose. In the USA, Apple has "more than double the brand appeal of BlackBerry, HTC, Motorola, Nokia and Samsung combined," the study noted. 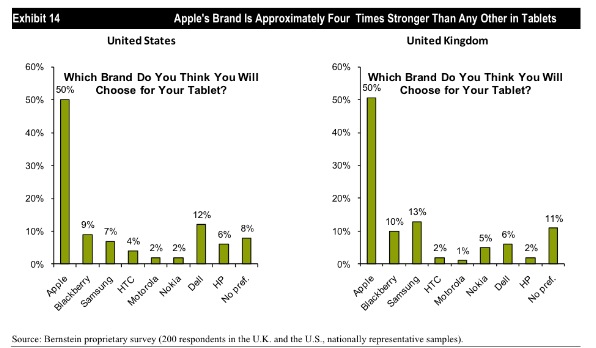 As a result of this, new tablets that move away from Apple's established tablet-standards result in poor interest. According to Bernstein Research:

We find that consumers are not interested in form factors that deviate from the benchmark set by Apple. Few consumers, less than 15 percent prefer the 7″ screen size versus the 10″ screen of the iPad . Over 50 percent of respondents are firmly in favor of the 10″ screen, which leads us to conclude that the 7″ tablet models recently launched, like the Blackberry Playbook, are destined for failure. Consumer’s preference for the 10″ form factor explains the lukewarm response to Samsung’s 7″ Galaxy tablet and the rapid introduction of larger screen models in that series.

It's unsurprising that Apple is ahead of the competition in the tablet market, because the company effectively reinvented the tablet computer as we know it. As far as the consumer is concerned, the tablet is the iPad.

Bernstein Research has predicated one of two possible outcomes to this situation. Either "tablets remain a premium market" (dominated by Apple), or the market polarizes, resulting a "premium" end (Apple) and a "fragmented lower-end." Personally, I'm not sure which I'm expecting to see.

Let us know your thoughts in the comments. 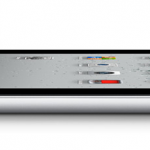 Consumers Choose Tablets Based On How Similar They Are To The iPad
Nothing found :(
Try something else