You are using an outdated browser. Please upgrade your browser to improve your experience.
by Bryan M. Wolfe
June 21, 2011
Apple has cut its orders for the iPhone 4 during the second quarter, which suggests Cupertino is gearing up for its fifth handset. This latest iPhone “5” rumor comes from Taiwan-based Digitimes, which reports on production issues affecting companies such as Apple and Samsung, among others. During the second quarter, Taiwan-based PCB (printed circuit board) has reported it has had to cut its quotes by 10 percent because of decreased orders from Apple. They state:

The Taiwan-based PCB companies, which are shipping products for iPads and iPhones, have seen disappointing orders for these devices in the second quarter, the sources said. Orders thus far for June show no signs of a rebound, the sources indicated.

Not surprisingly, the same report suggests orders will pick up significantly during the third quarter with “the iPhone 4S set to be launched.” Whether called the iPhone 5 or iPhone 4S, the next-generation handset is certainly coming. However, when that happens won’t really be known until Apple announces it. Rumors have suggested the next handset will arrive anywhere from July 2011 to sometime in 2012. Therefore, we really don't know. A rumor just yesterday suggested the iPhone 5 and iOS 5 would debut September 7. If Apple really is cutting orders for the iPhone 4, as Digitimes suggests, the iPhone 5 will be coming sooner rather than later. Apple usually announces new iPhones at its WWDC conference in June. However, that tradition ended this year. Instead, most recent rumors suggest Apple will unveil a new handset when iOS 5 is officially released to the public. Apple has already publicly announced its newest iOS is coming sometime this fall. As a reminder, we have a great iPhone 5 rumors roundup that we’re keeping up to date for those interested in more details. Make sure to check it out. Who wants their iPhone 5? Let us know by leaving your comments below. 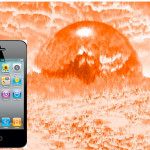 End Of Days For iPhone 4?

End Of Days For iPhone 4?
Nothing found :(
Try something else