You are using an outdated browser. Please upgrade your browser to improve your experience.
by Bryan M. Wolfe
June 20, 2011
Just weeks after Apple announced its iCloud and iTunes Match program, Facebook is rumored to be getting into the music business as well, according GigaOM. Strangely, this news comes just days after rumors circulated the social networking giant would implement a web-based app service approved by Apple. What’s going on here? Facebook and Apple are either friends or getting closer to an all out confrontation. Days after rumors surfaced Facebook was working on an HTML5-powered App Store alternative for iOS devices, which Apple is said to be "lending some minor support" for, comes something to the contrary. According to GigaOM, Facebook could launch a “Music Dashboard” service as early as this fall that includes the following:   Of course, this sounds a lot like competition for Apple’s own iTunes application. And begs the question: Would Apple endorse Facebook’s “Project Spartan” knowing of the social network’s music plans? Perhaps they would. While online music services have gotten many new players recently (Google, Amazon, Spotify), the app market is new by comparison. Perhaps Apple figures the "real money" going forward is in HTML5 web apps and not music. Ironically, Apple and Facebook were said to be working together on what would later become the Cupertino, California's iTunes-based Ping service. In the end, however, Apple partnered with Twitter instead. It is also worth mentioning that if Facebook is indeed going into the music business, what are they also working on? For example, will they also be getting into the movie or TV rental business as well? What about an online book service? Facebook's entry into ANY of these markets would be huge and could possibly hit Apple ]hard. After all, Facebook already has millions of customers worldwide. Each of these could begin making purchases via Facebook they might normally have done using Apple's iTunes application. Therefore, the stakes could be very high. What do you think? Leave your comments below. 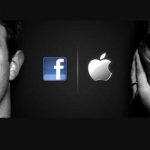 Is Facebook Apple's Friend Or Foe?
Nothing found :(
Try something else