You are using an outdated browser. Please upgrade your browser to improve your experience.
by Bryan M. Wolfe
June 9, 2011
The folks behind the popular Twitter app, Tweetbot, have just released a new update. Version 1.2 includes a boatload of new features that makes the app better than ever. First released in April, Tweetbot is the creation of Tapbots. Our first take on the app was that it could possibly be a “The Twitter for iPhone killer.” According to its iTunes page, Tweetbot now includes:   If you are looking for an impressive Twitter client app for your iPhone/iPod touch and don't mind spending a little money, this is the app for you. Tweetbot is available in the App Store for $1.99. 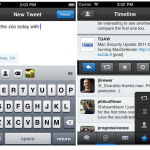 Tweetbot - The Twitter For iPhone Killer Gets Massive Update

Tweetbot - The Twitter For iPhone Killer Gets Massive Update
Nothing found :(
Try something else