You are using an outdated browser. Please upgrade your browser to improve your experience.
by Joe White
June 23, 2011
Talk about a bunch of cool catholics: The Vatican is now lending iPods pre-loaded with a special app to visitors, as part of a pilot scheme that's intended to run until Decemeber. The scheme has two aims: The first, to reduce the amount of noise caused by tour guides (and their groups), which roll around the historic site day-in, day-out. With the iPod, visitors can learn everything they need to know about Vatican in silence, using the built-in app. The second aim is to try and appeal to a wider audience, "a wider audience than the usual churchgoer," says the Rev. Caesar Atuire, CEO of the pilgrim agency. As reported by the Huffington Post:

Atuire suggested that, with a tap of the finger, tourists can zoom in on high-resolution images of artistic details, like the starry blue canopy above the towering high altar, decorating vaulted ceilings. The apps user also can refer to images from the Vatican Library not usually available to the public to enrich their understanding of their basilica tour.

As mentioned, the iPods are currently being trialled by the Vatican until December. Personally, I think this is a good idea - visitors will be able to find out everything they need to know using the iPod, and if the artwork and architecture doesn't turn you on, there's always Angry Birds or Doodle Jump waiting loyally in the App Store. Let's just hope the Vatican has Wi-Fi. 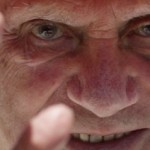 Vatican Gets With The Times, Starts Lending iPods To Visitors

Vatican Gets With The Times, Starts Lending iPods To Visitors
Nothing found :(
Try something else