You are using an outdated browser. Please upgrade your browser to improve your experience.
by Bryan M. Wolfe
July 7, 2011
Apple remains committed to its iAd mobile advertising network, but the results so far have been less than impressive. Now, it appears the tech giant is trying to attract advertisers with lower prices, but that may still not be enough, according to Adam Satariano from Bloomberg. When Apple’s mobile advertising program debuted in 2010, the company charged upwards of $1 million or more to run ad campaigns. However, despite cutting those prices by half by the end of the year, iAds is still struggling having only signed up its 100th customer in May. Now, the Apple bean counters are cutting prices again with ads now going for as little as $300,000 per campaign. Unfortunately, prices aren’t the only thing keeping advertisers away from iOS. Despite the popularity of the iPhone/iPod touch and iPad, iAds only work on those devices, as opposed to Google’s AdMob, which runs across multiple platforms. Unfortunately, short of opening up its services to other platforms, Apple can't do much about that limitation. According to Thom Kennon, senior vice president of strategy for Young & Rubicam:

“Apple’s closed ecosystem may have been interesting in the short run for advertisers, but in the long run they priced themselves out.”

It also doesn’t help that existing advertisers claim they haven’t made much money on their iAds. As such, they are looking elsewhere. For example, State Farm Mutal Automobile Insurance Co. and J.C. Penney, two the first companies to sign up for iAds, are now using competing mobile-advertising networks. This isn’t the first time we highlighted Apple’s mobile advertising woes. In fact, in April, we called iAd, Apple’s “First Egg Of The Millennium.” This story continues that theme. Does this mean much to the everyday mobile customer? Absolutely not, but for Apple its iAd woes represent one of its few sore spots in recent years. What do you think? Leave your comments below. 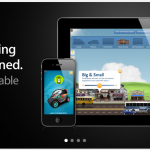 Apple Lays Its First Egg Of The Millennium - Part II

Apple Lays Its First Egg Of The Millennium - Part II
Nothing found :(
Try something else