You are using an outdated browser. Please upgrade your browser to improve your experience.
by A.T. Faust III
July 11, 2011
Last week, Patently Apple uncovered a trio of granted patents for our favorite electronics giant. Two of those, dealing with plug-in architecture for exporting digital images (in iPhoto and Aperture) and the iPhone's video conferencing user interface, are more specifically intricate than the patent of our main interest, namely the described marriage of various computer displays to near field communication (NFC) technology. Apple's NFC approach, which no doubt includes the many traditional uses of the technology, puts a tremendous emphasis -- in this particular granted filing, at least -- on security. Of the following image, Patently Apple has this summarization of patent 7,973,722: 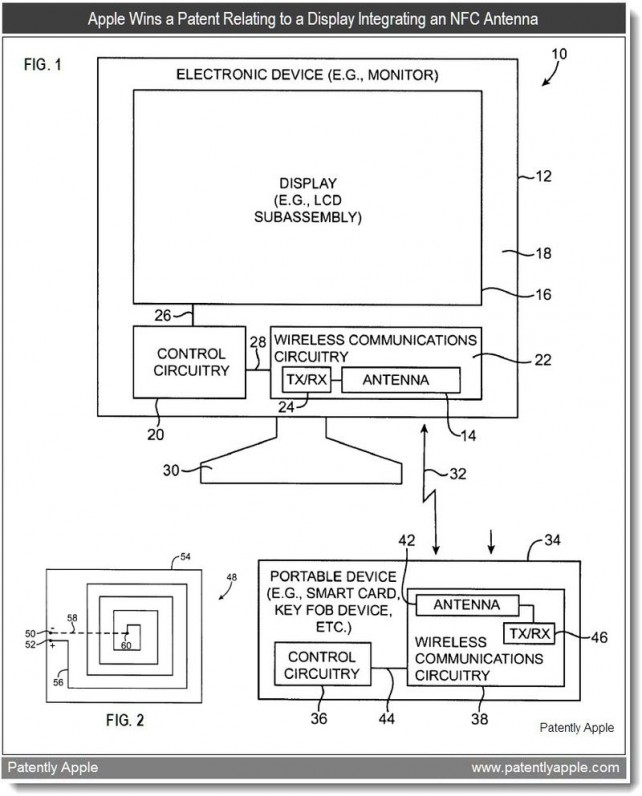 The main device # 10 shown in patent FIG. 1 above is that of an iMac (desktop display) which is in communication with device # 34 which could be an iPhone, iPod touch or any other iOS device... Additionally, device # 34 could even be a security device which could come in the form of a smart card, a key fob device or other suitable compact wireless device. ...FIG. 2 noted above is a top view of an illustrative antenna having a spiral conductor layout and a substantially square footprint. ...[E]lectronic device 10 as shown above may be, for example, a desktop or laptop computer, a router, a kiosk, a point of sale terminal, industrial equipment (e.g., on a factory floor), medical equipment, a printer, a camera, a mobile telephone, a media player, a handheld computer or other handheld device, a hard disk drive enclosure, or any other suitable electronic equipment.

From that last paragraph, it can be ascertained that Apple's main audience with this claim is the retail, professional, and medical sectors. However, the tech seems to have promising individual user implications, as one's portable device may soon serve to not only unlock and log in to a computer but actually import -- via iCloud, most likely -- user settings, system restrictions, and other modified content, thereby "personalizing" any Mac. Because the cited implementation "requires that the security device be located within several inches" of the station in question, Apple believes that NFC is a superior verification mechanism for nearly any multi-user environment. Of course, in the home, the technology is probably best suited as a simple and efficient way to link up your portables as additional input peripherals. It'd certainly be more direct than Wi-Fi! And we'd better be able to turn it off. 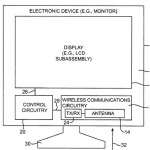 Apple Wins Another NFC Patent, This Time With Visions Of A More Secure World

Apple Wins Another NFC Patent, This Time With Visions Of A More Secure World
Nothing found :(
Try something else