You are using an outdated browser. Please upgrade your browser to improve your experience.
by Joe White
July 5, 2011
A new report by one analyst with Global Equities Research claims Apple's iTunes platform (which includes the iTunes Store, App Store and iBookstore) will generate $13 billion in 2013. The news, which reached us via Matt Brian of The Next Web, claims the success of Apple's digital platform can be attributed, in part, to the iBookstore and Apple's iBooks application. According to analyst Trip Chowdhry, the company's "research with students indicates that they would rather have books on iPad vs. Kindle." This is because "Kindle application lacks the finish and crispness of an iBook," the report concluded. In my own experience, I generally avoid reading altogether on an iPhone or iPad, namely because the screen plain hurts my eyes. However, the Global Equities Research report begs to differ - clearly, as a student, I'm in the minority. The research also notes that iTunes' app attachment rates are increasing - just six months ago, it was 15, and now it's in excess of 45. More and more people are spending cash in the App Store, and, because Apple takes a 30 percent cut of all purchases, the company is benefiting from this continuing bout of "app-mania." Apple will announced its second quarter earnings in a conference call on July 19. If this report is anything to go by, they'll be impressive. We'll keep you posted. 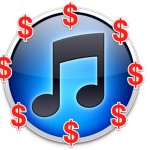 Apple's iTunes Platform To Contribute $13 Billion In 2013
Nothing found :(
Try something else