You are using an outdated browser. Please upgrade your browser to improve your experience.
by Joe White
July 23, 2011
Yesterday, Apple released the fourth beta version of iOS 5, which was available to download "over-the-air." However, a recent Twitter update by iPhone Dev-Team member @MuscleNerd notes that these OTA updates are currently not compatible with jailbroken iOS devices. He notes that the limitation is "almost like a present from Apple." He wrote:

The 5.0b4 OTA update won't work on JB devices due to an explicit check of /Applications..almost like a present from Apple

Basically, the /Applications directory is not a real directory in a "stashed jailbreak." Because of this, Apple's OTA software update fails repeatedly on jailbroken iOS devices. According to the iPhone Dev-Team, the only way to update to iOS 5 beta 4 on a jailbroken iOS device is to use the "standard iTunes method," and reapply the jailbreak using the recently updated redsn0w jailbreak solution. We'll keep you posted. 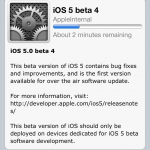