You are using an outdated browser. Please upgrade your browser to improve your experience.
by A.T. Faust III
July 11, 2011
In the wake of last week's 15 billionth app download, an interesting (if slightly controversial) article out of CNN's Fortune division has pegged iDevice users as 61 percent more likely to purchase apps, paying an average of 14 percent more per paid download. This information, reported by Philip Elmer-Dewitt and based on Piper Jaffray analyst Gene Munster's research, concludes the following: Most aspects of the listed assessments are pretty solid, but it is important to note a couple of sticking points. To some of us around the office, that 83 apps per active device seems a bit high as an absolute average. True, some of us own hundreds -- even thousands -- of apps, but unless these figures are discounted at the extreme edges, the data could be a little misleading. And, because Apple only reports App Store downloads and revenue, it can be a difficult thing to get a per-unit breakdown. Additionally, we can't be sure Munster's model doesn't include re-downloads of paid content to one or more devices, as we're not even certain those figures exist outside of Apple's private books. The other point of contention I have with Munster's analysis is that it's a very specific snapshot and little else. Though the Android Market has only 200,000 apps, we know from current trends that it's set to soon overtake the App Store in terms of quantity. While that won't have much of an impact on the growth and dominance of the Apple's environment, it will change the overall percentages of cited user preference regarding the disparity of paid app downloads. Unfortunately for Google, that probably means they're going slip the gap even more. To close, though, we'd like to hear about your own app-counts, so let us know in the comments. (I currently have 93 apps on my iPhone, roughly 20 percent being the paid variety.) 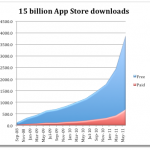