You are using an outdated browser. Please upgrade your browser to improve your experience.
by Clinton Ferreira
July 18, 2011
Plants vs. Zombies by Popcap is a tower defence game in which a map must be defended against traversing enemies by erecting towers that shoot at the enemy. The Plants are the defensive shooting structures available to players who would like to stop the Zombies from eating their brains! You will need to face-off against the Zombies on your front lawn, back yard with a pool and finally your roof both day and night. If even one Zombie gets into your house, it’s game over. 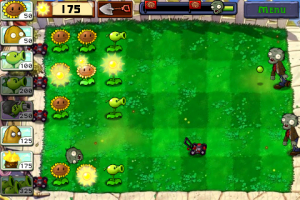 There is a large variety of both Plants and Zombies not all of which are present in each level. Some plants generate Sun Power (the resource needed to lay down additional plants), some control the enemy (say, by slowing them) and some do extra damage. The Zombies are almost as varied and need to be dealt with in different ways whether they can take extra damage, move more quickly or do something tricky like pole vault, float on a balloon or ride a dolphin (a Zombie dolphin, of course). You must choose which plants you want to use and those choices should be affected by what may be trying to enter your house. Luckily, an almanac is provided giving detailed and often humorous descriptions of each Plant and Zombie. Combined with Crazy Dave, your nutty in-game guide, you’re never left feeling clueless. The 50-level Adventure mode avoids tedium by throwing in a bonus game every 5 levels or so where the Zombies still need to be stopped but in some slightly different way like ‘bowling’ them down, for example. As you progress, additional features are unlocked such as a garden for growing your own plants, additional mini games such as having the Zombies shoot back and a shop where items can be purchased with in-game currency to enhance gameplay. No additional costs are involved beyond paying for the game itself. Once Adventure mode has been completed, a Quick Play section is made available allowing levels to be replayed at will. The usefulness of Adventure mode, however, does not end there. It can be played again with greater difficulty or started completely afresh with multi-user support. The controls are simple and reliable but misplaced unless you play left-handedly or with both thumbs. I found my right hand constantly having to cross the screen to lay down plants. While this hardly made the game unplayable, it did detract from gameplay a little. An option to reverse from which side the Zombies were attacking would have been welcome on the iPhone, although clearly not a problem on the PC where the game was originally released. 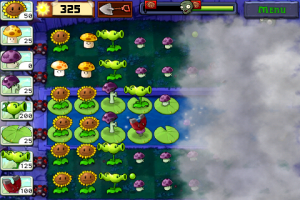 Plants vs. Zombies is immensely entertaining. Every aspect of the game is fun and quirky. Even the music is very often enjoyable and somehow avoids being repetitive. One gets the impression a lot of fun was had making it and you should have a lot of fun playing it. [gallery]