You are using an outdated browser. Please upgrade your browser to improve your experience.
by Casey Tschida
July 16, 2011
Always keeping an eye out for the next neat gadget, but your unnecessary tech budget never seems to get very big? Well, Griffin Technology, a top provider of mobile devices accessories, has announced that they'll be releasing a $50 iOS-controlled mini RC helicopter later this year. To be clear, the Helo TC doesn't sound like anything that will satisfy those with immense cravings for Parrot's AR.Drone quadricopter. But to be honest, many of us will likely never have the opportunity to gloat or even pilot one of those magnificent flying machines anyway. Instead, let us look to the positives of Griffin's upcoming gadget. Helo TC's $50 price tag is likely a much more realistic purchase for most households versus $300 for the AR.Drone. Helo TC also comes equipped with five bright LEDs for night or otherwise dimly lit flying environments. Because of less sophisticated onboard equipment, Griffin's aircraft does have a 50% better runtime efficiency, albeit shorter per charge. The Helo TC has an estimated runtime of eight minutes with a charge time of about 30 minutes, whereas the AR.Drone has a flight time of about 12 minutes with about 90 minutes required for a full charge. Beyond those features, the Helo TC is powered by a lithium-polymer battery pack to run the dual main rotors and a small tail rotor, charges via a USB connection, and controlled using the Helo TC iOS app. The app will offer both touch and tilt control options. It should be obvious that this copter indeed has shortcomings compared to much more serious RC competitors. The Helo TC lacks any on-board video system, only works indoors (can't compensate for wind), and uses infrared instead of radio frequency for remote control. The use of IR does mean you'll need to attach an IR transmitter to your iPhone or iPod touch, which uses 4 AAA batteries, and remain a fairly close distance with line-of-sight. Admittedly, a person can pick up a non-iDevice controlled twin-rotor mini-copter for the same price or cheaper than Griffin is offering the Helo TC for; although, it is another option for those looking to experience the enjoyment of flying something. Griffin Technology is scheduled to have the Helo TC available in time for Christmas at a manufacturer suggested retail price of $49.99, about £34.99. The Helo TC app will be a free download in the App Store. The Helo TC package will include the copter, battery, IR transmitter, and one replacement main rotor and tail section assembly. Griffin recommends the Helo TC for those age 14 and older. 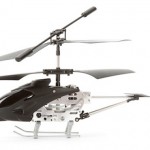 Griffin Technology To Release The $50 Helo TC iOS-Controlled Helicopter This Christmas Season
Nothing found :(
Try something else