You are using an outdated browser. Please upgrade your browser to improve your experience.
by Bryan M. Wolfe
July 13, 2011
China Telecom Corp Ltd will soon be offering its 106 million subscribers access to the iPhone for the first time, according to news first reported exclusively by Reuters. The news, which comes just weeks after Apple COO Tim Cook’s recent visit to China, means that two of the country’s three carriers will now offer the popular handset. According to the report, China Telecom will begin offering the iPhone to its customers by the end of 2011.

“It's expected to happen this year. China Telecom already has the required technology and it all hinges on the content of the agreement. As we all know, it's not easy to negotiate with Apple," a source close to the company, speaking on condition of anonymity, told Reuters.

China Unicom began offering the iPhone in 2009. Meanwhile, despite Cook’s visit with China Mobile in June, there is no indication the iPhone is coming to the country’s largest phone carrier, at least for now. China Mobile presently uses a homegrown TD-SCDMA standard, which doesn’t play nice with existing iPhones. However, it is working on a fourth-generation TD-LTE radio technology that could be used with future Apple devices. According to this more recent report, “a more likely scenario was for Apple to support China Mobile's 4G LTE (long-term evolution) technology, which would only be available either in late 2012 or 2013.” Regardless, with China Telecom now onboard, the number of iPhone subscribers will surely jump further in the next few months. 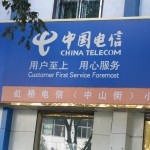 Number Of iPhone Customers Could Soon Jump By 106 Million

Number Of iPhone Customers Could Soon Jump By 106 Million
Nothing found :(
Try something else