You are using an outdated browser. Please upgrade your browser to improve your experience.
by Joe White
July 4, 2011
If you're one of the lucky few who has managed to snag a Google+ invite, we have some good news: According to Google's Erica Joy, an official Google+ iPhone application has been submitted to the App Store, and is currently awaiting Apple's approval. The news came via Erica Joy's Google+ account, in an update that read:

For all my iPhone using friends: the Google+ iPhone app has been submitted to the App Store (no, not today, sometime prior to today) and is awaiting approval.

The brand new social network, which launched recently, is something of a Facebook competitor, allowing users to interact with friends, post and tag photographs and participate in video calls. Personally, I've found the service to be refreshing and enjoyable to use. The only downside, of course, is the absence of an official iPhone application (currently, it's only possible to interact with the service in Safari for iOS, which, in all honesty, works well enough). If Erica Joy's update is anything to go by, we can expect a Google+ application to hit the App Store soon. And if Google really does want to take on Facebook, it'll hopefully be a universal app, too. We'll keep you posted. [via 24100] 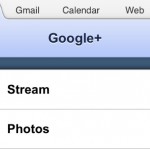 Official Google+ iPhone App Is Awaiting Apple's Approval
Nothing found :(
Try something else