You are using an outdated browser. Please upgrade your browser to improve your experience.
by Bryan M. Wolfe
July 28, 2011
We know these iPhone 5 rumors are getting exhausting, but this one could spark your imagination. Late last night, 9 To 5 Mac received a tip from someone who believes they saw an unreleased iDevice being used by someone on a train heading from San Francisco. As such, the unnamed tipster snapped the attached photo believing the person was an Apple employee and the iDevice in question was a test version of the iPhone 5. Nothing seems to be supporting it, but if they're right this means Apple is getting really close to release. Accordingly, the tipster felt that the handset he saw would fit perfectly in the rumored iPhone 5 cases, which we highlighted earlier this week. From there, the site checked out the source before actually posting the photo they claim.  As such, perhaps this is the iPhone 5. According to 9 To 5 Mac:

“Almost EVO-like” in screen size, this iPhone also appears thinner than the current iPhone 4 but also wider.  The edges are rounded metal like the edges of a Samsung Galaxy Tab 10.1 but could still function as an antenna.  The back is a curved/tapered glass or plastic.  He couldn’t tell but if he had to guess he’d say glass.  He said it looked too amazing to be built by anyone besides Apple (fanboy!).

It is entirely possible this photo does show an iPhone 5. It's very likely however that it does not. Either way, we know that Apple is testing these devices out there, so every time you see an iPhone these days, make sure if it's really a model you know. After all, Apple is certainly known to test their iDevices before setting them free on the public. Plus, it would certainly make sense that an Apple employee (based in Cupertino, California) would be on a San Francisco train. Still, as usual, we'd like to stress that this is only a rumor. What do you think? Leave your comments below. 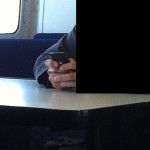 Unconfirmed: Apple Field-Testing iPhone 5
Nothing found :(
Try something else