You are using an outdated browser. Please upgrade your browser to improve your experience.
by Joe White
August 27, 2011
Apple has completely removed the ability to rent TV shows through iTunes. For the past year, it has been possible to rent television shows for a small fee through iTunes. The feature worked just like movie rentals - through while movie rentals are still available for iTunes users, TV rentals are not. An Apple spokesperson confirmed the change recently with All Things Digital. According to the website:

“iTunes customers have shown they overwhelmingly prefer buying TV shows,” Apple spokesman Tom Neumayr said. “iTunes in the Cloud lets customers download and watch their past TV purchases from their iOS devices, Apple TV, Mac or PC allowing them to enjoy their programming whenever and however they choose.”

Furthermore, it would appear that TV studios aren't interested in renting out shows, either. The News Corp. owned studio, Fox, said in a statement:

After carefully considering the results of the rental trial, it became clear that content ownership is a more attractive long-term value proposition both for iTunes customers and for our business. To further enhance the value of ownership, we are working with Apple to make content available within their new cloud-based service.

In the past, we've heard that Apple is planning on launching a video streaming service - this service could provide users with television shows, as well as movies. However, as of this moment, nothing has been confirmed by Apple. Are you going to miss TV rentals? Let us know in the comments. [via Cult of Mac] 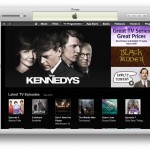 Confirmed: Apple Has Removed TV Rentals, And They're Not Coming Back

Confirmed: Apple Has Removed TV Rentals, And They're Not Coming Back
Nothing found :(
Try something else