You are using an outdated browser. Please upgrade your browser to improve your experience.
by Alexander Vaughn
August 8, 2011
This might make you feel like you're reading TMZ for a minute, but you'll be thrilled to hear that the world's top jailbreak experts have made it to DEFCON this year in Las Vegas and they took advantage of the occasion to meet/party. In a photo posted by developer Justin Williams, from a party in a Las Vegas hotel room and tipped to us by ijailbreak.com, you might recognize many familiar faces. Such as: The reason for this meeting was a "#jailbreak" party, organized by P0sixninja in his hotel room during the conference. Clearly, they seem to be having a great time. Yet, we can't see much alcohol or company around them, which some might argue is the key to their success. Either way, we can only hope that when so many great minds come together it will spark something exciting. As a reminder, Comex and Geohot have received some interesting awards at this year's DEFCON, including a Pwnie for best client-side bug, as well as best song. 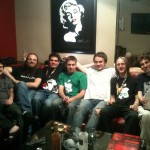 Jailbreak Experts Comex, Geohot And Many More Spotted Together At DEFCON Party

Jailbreak Experts Comex, Geohot And Many More Spotted Together At DEFCON Party
Nothing found :(
Try something else