You are using an outdated browser. Please upgrade your browser to improve your experience.
by Joe White
September 13, 2011
Yesterday, HP announced a new mobile application that promises to allow users to "print, copy and scan interactively from a mobile device." Now, an Apple source has apparently told 9to5Mac that the Cupertino, CA company is working on a similar scanning app, which uses an iOS device's camera to scan documents. The application, "Scanner," will apparently allow users to shoot an image of a document and convert the text and images into a digitised version. The various aspects of this digital document can be tweaked by the user. According to 9to5Mac, the application's on-board software will be able to separate images and text. The resulting document can then be saved in various formats (PDF and Pages, for example) or exported to the Contacts application (e.g., when a business card is scanned). Obviously, we can't be sure whether 9to5Mac's source is legitimate, and for this reason we can't go expecting a "Scanner" app to launch in iOS 6. However, as the website notes, various third-party digital scanner applications are available, and an Apple patent (the news of which hit the Web earlier this year) does suggest that the company is working on such an application. We'll keep you posted. In the meantime, you can read more about HP's upcoming application by checking out the official PDF (which, we should note, doesn't work in Safari - try it with Chrome, instead). 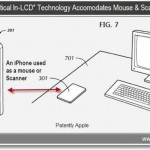 Apple Developing App That Allows Users To Scan Documents With iPhone's Camera?
Nothing found :(
Try something else