You are using an outdated browser. Please upgrade your browser to improve your experience.
by Joe White
September 30, 2011
As promised, AT&T has started throttling unlimited plan customers who consume an excessive amount of cellular data. Back in June, we heard that AT&T was aiming its crosshair at unlimited customers who were in the top five percent of the carrier's "heaviest data users," and that the company would begin firing from October 1. As outlined in AT&T's official statement, which hit the Web in June:

Now, it looks like the process of limiting the data usage of so-called "data hogs" has begun. As you can see in the above screenshot, one AT&T user has already been warned by the carrier, and will likely "get throttled" as a result. This isn't something limited to just AT&T. In fact, Verizon is also planning on targeting its heaviest data users, too. Let us know if you've received a similar message from AT&T in the comments. [via 9to5Mac] 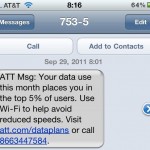