You are using an outdated browser. Please upgrade your browser to improve your experience.
by Alexander Vaughn
September 2, 2011
We track iPhone 5 rumors for fun as well as out of our passion for the subject. For case makers, on the other hand, it's a much bigger deal. Their business depends on the ability to predict Apple's designs, and while they're being given less clues from Apple (who used to provide them with the specs ahead of time), they have been quite good at guessing what upcoming Apple hardware will be like. For that very reason, Italian Apple news site Macity has managed get their hands on some upcoming iPhone 5 case prototypes to compare its size to current devices (picture above and below, full gallery on their site). They believe these prototypes were built based on an undisclosed case maker's best knowledge, and should fit the upcoming iPhone perfectly. Of course, whether this is based on someone's wild imagination, an educated guess, or inside sources (which happens more often than you think), it is impossible to corroborate. If you believe this discovery, it would suggest the next iPhone will be significantly slimmer, like the current iPod touch, and will indeed, as rumored, feature a bigger screen. Of course, knowing that memory and chips get smaller every year, it's not out of the realm of possibility that Apple might make the next iPhone thinner. On the other hand, the largest part of the device is currently the battery, and we wouldn't want Apple to make it any smaller. Hopefully, if this is true, the larger size would allow Apple to maintain the current capacity. As for the larger screen, this remains the biggest unknown regarding Apple's next iPhone. Technically, it's possible without causing problems in apps or giving up on the Retina display (only so slightly you wouldn't be able to notice). However, we're split on this one here. What do you think? Let us know! 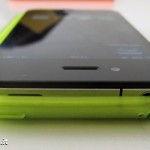 If You Believe Case Makers, The iPhone 5 Will Be Significantly Different

If You Believe Case Makers, The iPhone 5 Will Be Significantly Different
Nothing found :(
Try something else