You are using an outdated browser. Please upgrade your browser to improve your experience.
by Joe White
September 17, 2011
The iDroid Project, a group that aims to fully port Android OS to Apple's iOS devices, has just taken to the stage at MyGreatFest. Here's what the team behind the project had to say. Back in 2008, the project initially began under the name of the "iPhone Linux Project." This project aimed to boot a Linux kernel, and by the end of 2008, this aim had been achieved. The year after, the hacker behind the iPhone Linux Project surprised everybody by presenting a working first-generation iPhone running Android OS: The iDroid Project was born. Since, the iDroid Project has been working hard on creating a full port of Android on other iOS devices. Currently, iDroid has been downloaded hundreds of thousands of times. However, there is still work to be done. The iDroid Project is concentrating on bringing iDroid to the iPhone 3GS and iPhone 4, and in supporting other versions of Apple's mobile operating system. The really impressive thing about iDroid is that users can run Android and iOS on the same iPhone, side by side, meaning it's kind of like Boot Camp for OS X. It's definitely an interesting project, and something we'll be keeping an eye on. For more information on the iDroid Project, head on over to its official website. [gallery columns="4"] 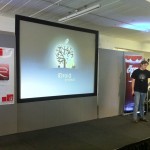 MyGreatFest - The iDroidProject Takes To The Stage

MyGreatFest - The iDroidProject Takes To The Stage
Nothing found :(
Try something else