You are using an outdated browser. Please upgrade your browser to improve your experience.
by Bryan M. Wolfe
September 19, 2011
Here’s one way to change the subject. Three weeks after Netflix’s price increases took effect, the company has a new message for its customers and stockholders – Please Don’t Leave Us. Oh, and they’re dropping the Netflix name for one of its two primary services. In July, the online giant announced plans to decouple its DVD by mail and streaming video plans, and making them more expensive. For existing customers, these prices took effect at the beginning of September. At the time, we suggested these changes would force Netflix customers to choose between DVDs or streaming, but not both. However, there was a third choice that we (and Netflix) missed: cancelling the service altogether. Now, with Netflix poised to lose 600,000 customers in the current quarter by September 30, and its stock down 46 percent since the price change announcement, the great mea culpa has begun. In a blog post entitled, “An Explanation and Some Reflections,” Reed Hastings, Co-Founder and CEO of Netflix admits his company’s woes and offers a “sincere” apology for those customers that felt Netflix “lacked respect and humility," when it announced the price increases. However, just because Netflix "gets it" now, the price increases remain. Only now, they've decided that "(they're) done with that!" Say Hello To Qwikster What is changing, however, is the name of Netflix’s DVD delivery service. This will now be called Qwikster. The new service, which launches soon, includes DVD and video game rentals. As Reed contends:

Each website will be focused on just one thing (DVDs or streaming) and will be even easier to use. A negative of the renaming and separation is that the Qwikster.com and Netflix.com websites will not be integrated. So if you subscribe to both services, and if you need to change your credit card or email address, you would need to do it in two places. Similarly, if you rate or review a movie on Qwikster, it doesn’t show up on Netflix, and vice-versa.

Rebranding half its business is an interesting move by Netflix. However, because the price changes remain, we’re not sure it means much in the long run. Actually, if anything, it could cause more cancelations. When renting DVDs, Netflix customers have long received those famous red and white envelopes in the mail. Now, those will be gone. Instead, DVDs will be coming from Qwikster. For Streaming Customers If there is one positive in Netflix's announcement, it is that the "new" Netflix will now be focusing all of its attention on its streaming business. After months of losing streaming partners, perhaps this new emphasis will lead to more content providers. If this is the case, this could eventually be great news for iOS customers who like streaming content via the Netflix app. Of course, time will tell. 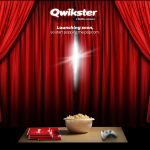 Netflix Spinning Off DVD Service, Concentrating Instead On Streaming

Netflix Spinning Off DVD Service, Concentrating Instead On Streaming
Nothing found :(
Try something else