You are using an outdated browser. Please upgrade your browser to improve your experience.
by Joe White
September 22, 2011
Back in June, the Financial Times decided to ditch the App Store and produced a Web app, due to Apple's controversial in-app subscription policy. Now, in a report recently publish by Reuters, it is claimed that the Web app has attracted over 700,000 readers, making it more popular than the iOS application was before it was removed from the App Store. Many publishers were outraged by Apple's in-app subscription policy, because it prohibited developers from linking to their own subscription model from within an iOS application. This meant that the only way users could subscribe to content from within an app was via an in-app subscription, the proceeds of which Apple takes a 30 percent cut. In rejecting the policy, the Financial Times removed its iOS application from the App Store, and created a Web app instead. Just two weeks after its launch, the Web application had been downloaded 200,000 times. Now, several months later, the publication has announced that the Web app has attracted more readers than its iOS app had, back when the application was available. According to Reuters:

More than 700,000 people use the Financial Times' Web-based mobile application to access news and other content, making it more popular than the version sold in Apple's App Store.

Further details regarding this figure haven't been provided, and we're not sure how the Financial Times has gauged its Web app and iOS app readerships. If the two are indeed comparable, this is an impressive feat, and just goes to show that there is indeed a world outside of the App Store. Rob Grimshaw, the Managing Director for FT.com, is quoted as saying:

The world outside the App Store is not cold and desperate. Discovery is no problem at all.

Perhaps, in time, we'll see more publications take a similar approach. If you're a user of the Financial Times' Web app, let us know your thoughts on the app's performance in the comments. 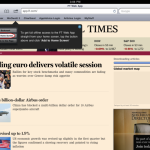 Reuters: Financial Times' Web App Has Attracted More Than 700,000 Readers
Nothing found :(
Try something else