You are using an outdated browser. Please upgrade your browser to improve your experience.
by Joe White
September 14, 2011
The UK Advertising Standards Authority has recently ruled that Apple has the right to call its handset "the world's thinnest smart phone," and that the Samsung Galaxy S II does not hold a claim to the title because of its larger, thicker derrière. For a while, Apple called its fourth generation iPhone handset "the world's thinnest smart phone." Then, the Samsung Galaxy S II was announced and released, which indeed was thinner - kind of. Above the base of the Galaxy S II, the handset has a depth of 8.71 millimetres, while the iPhone 4 is thicker, with a depth of 9.3 millimetres. However, when it gets to the Samsung Galaxy S II's base, things change: The smart phone has a depth here of 9.91 millimetres, while the iPhone 4 maintains its 9.3 millimeter width. Because of this, the UK Advertising Standards Authority has awarded the title of "world's thinnest smart phone" to Apple's iPhone 4, and not to the Samsung Galaxy S II. But before the Samsung fans out there get too upset, the Authority hasn't got an issue with the handset itself. In fact, as TechCrunch notes, Motorola recently had its palm slapped for advertising its Atrix as the most powerful smart phone on the market. This title was instead awarded to the Samsung Galaxy S II, which of course has a faster processor than the Atrix handset. Apple's reputation for producing slimline, attractive hardware has been preserved by the Authority, at least in the UK. But is the decision fair? Let us know your thoughts in the comments. 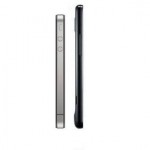 UK Advertising Authority States That iPhone 4 Is Thinnest Smart Phone, Not Galaxy S II
Nothing found :(
Try something else