You are using an outdated browser. Please upgrade your browser to improve your experience.
by Bryan M. Wolfe
October 3, 2011
You’ve seen our predictions, now here are the latest iPhone rumors flying around the blogosphere. And yes, these are only rumors. First, 9 To 5 Mac confirms Assistant will be one of the stars tomorrow when Apple announces the iPhone 4S and/or iPhone 5. In fact, the site claims on “Tuesday, Apple will change the way humans interact with electronic devices. All over again.” Assistant, which is rumored to be a new voice service using Nuance and Siri technology, is likely to arrive exclusively on the iPhone 5. For more information on Assistant, please check out our report from last week. Meanwhile, Robert Scoble reports that whatever Apple/Facebook alliance is announced will be much bigger than originally believed. In fact, it will be “stunning in its depth.” More important, perhaps, will be something Scoble calls “Steve Jobs’ last big thing,” the three screen strategy. According to Scoble:

I'm hearing that Apple is working on a new iPad app that looks a lot like DirecTV without the dish, too. Again, that app will have Steve Jobs' fingerprints all over it as it will be more expansive than the press is expecting in its content availability. There's a reason Apple built a 500,000-square-foot datacenter (about twice the size of a Facebook one, by the way) and that new datacenter is for video and the data that video causes to be shared with everyone. Will +Reed Hastings CEO at Netflix be on stage tomorrow to help Apple explain its three-screen strategy? I sure hope so, because that would explain further why Netflix split up its streaming and DVD businesses a lot better than Reed's been able to so far.

Finally, as we reported earlier, BGR suggests the iPhone 5 will ONLY come to Sprint, with the iPhone 4S coming to AT&T and Verizon. On this we say, no way. As usual, we'll keep you updated. As a reminder, Apple's iPhone event begins tomorrow, Tuesday, October 4 at 1 p.m. EDT. 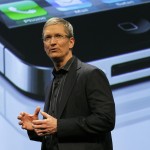 Last Minute iPhone Rumors
Nothing found :(
Try something else