You are using an outdated browser. Please upgrade your browser to improve your experience.
by Joe White
October 30, 2011
Since the launch of the iPhone 4S, countless Apple fans have been complaining that their handset can barely make it through the working day without needing a quick, hurried recharge. The tech specs for Apple's fifth generation iPhone disagree, though many are now suspecting that a bug in iOS 5 is responsible for the handsets' rapidly-depleating battery life. In a report recently published by the Guardian, the issue is discussed in depth. Some suspect that the iPhone's Location Services are to blame, and that the handset simply offers too many location-based features (like Reminders, Weather, Siri et. al.). One Web and Java consultant is even quoted as saying: "Two years working with dedicated GPS units taught me to be extremely careful with GPS settings: [it] kills battery very fast." You could go about countering the battery life issue by switching off the location features of these location-based apps, but then there's little point in owning the world's best smart phone if you can't take advantage of everything it has to offer. A recent report from iDownloadBlog suggests that a battery-draining bug is present in Apple's "Setting Time Zone" feature:

[I]t appears that iOS 5′s GM release introduced a bug that causes the Setting Time Zone function to keep the location tracking circuitry running constantly, draining battery power considerably. Switching it off may mean that your iPhone will no longer set its own time zone when you travel, but that's a small price to pay for having your iPhone last more than 12 hours on a full charge [...] We have tested this method on 4 different iPhone 4s handsets, including an iPhone 4 and an iPhone 3GS. All have reported drastically improved battery life after switching 'Setting Time Zone' off.

This feature can be accessed from the Settings app, in the "System Services" section of "Location Services." The website suggests that switching the "Setting Time Zone" toggle to off will result in improved battery life. I've been testing this fix for the past few days, and still I would suggest that the battery life of my iPhone 4S entirely depends on usage - if I make a large number of voice and FaceTime calls, use some apps and browse the Web for a long time, the handset might not make it past supper. But if I use it every so often for checking Facebook, sending SMS messages and iMessages etc., then I can usually scrape through to the end of the day with around 30 or 40 percent battery life remaining. It's likely that Apple will release a minor update in the near future that improves the handset's battery life. But if you can't wait until then, try the above method and see if it works for you. 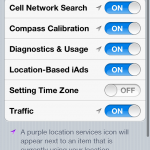 Location Services Bug Suspected To Be The Reason Behind iPhone 4S Battery Life Issues
Nothing found :(
Try something else